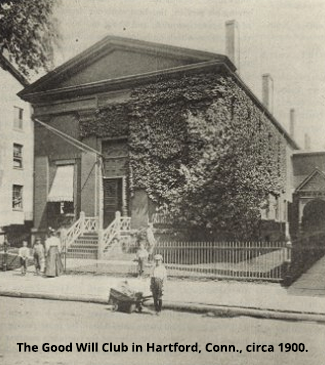 In 1900, Miss Kate Van Duzee noticed 13 boys constantly playing in the street outside her home. As a result, the Dubuque Boys Club was founded in her kitchen. This was the 40th Boys Club in the United States. The Boys Club was one of two Clubs west of the Mississippi River.

Due to its popularity in 1901, the Boys Club makes its 1st move to the upper floor of the Municiapl Building. Again as a result of a growing membership, the Club then moved to the 2nd floor of a school building at 12th & Central Ave. Due to further growth, in 1935 the Club moved again to a larger building located at 9th & Iowa St, and stayed there until 1965.

In 1965, the Boys Club launched a $500,000 capital campaign to purchase land and construct a facility at 1299 Locust(former site of a church). The approximately 22,000 sq. ft. facility was built and is still the home of the Boys & Girls Club of Greater Dubuque.

The Dubuque Girls' Club was founded by a group of concerned individuals in 1973. After a couple of moves, the Girls Club was housed at a single family dwelling in the 1600 block of Iowa St. in 1998, the Board of Directors of both the Girls' Club and Boys Club met to discuss the possibility of a merger of the two orgranizations.

WIth the blessing of the United Way(since both organizations were funded partners of the United Way), the Girls' Club and Boys Club officially merged in 1999 to form the Boys and Girls Club of Greater Dubuque.

To be able to better serve some of the underprivileged children of the Dubuque community, the Boys & Girls Club underwent a $3.8M capital campaign for the purpose of operating, facilities and endowment. Upon completion of the campaign, the Club raised $4.3M. This includded a modification of the existing building and an expansion of 14,000 additional sq. ft.